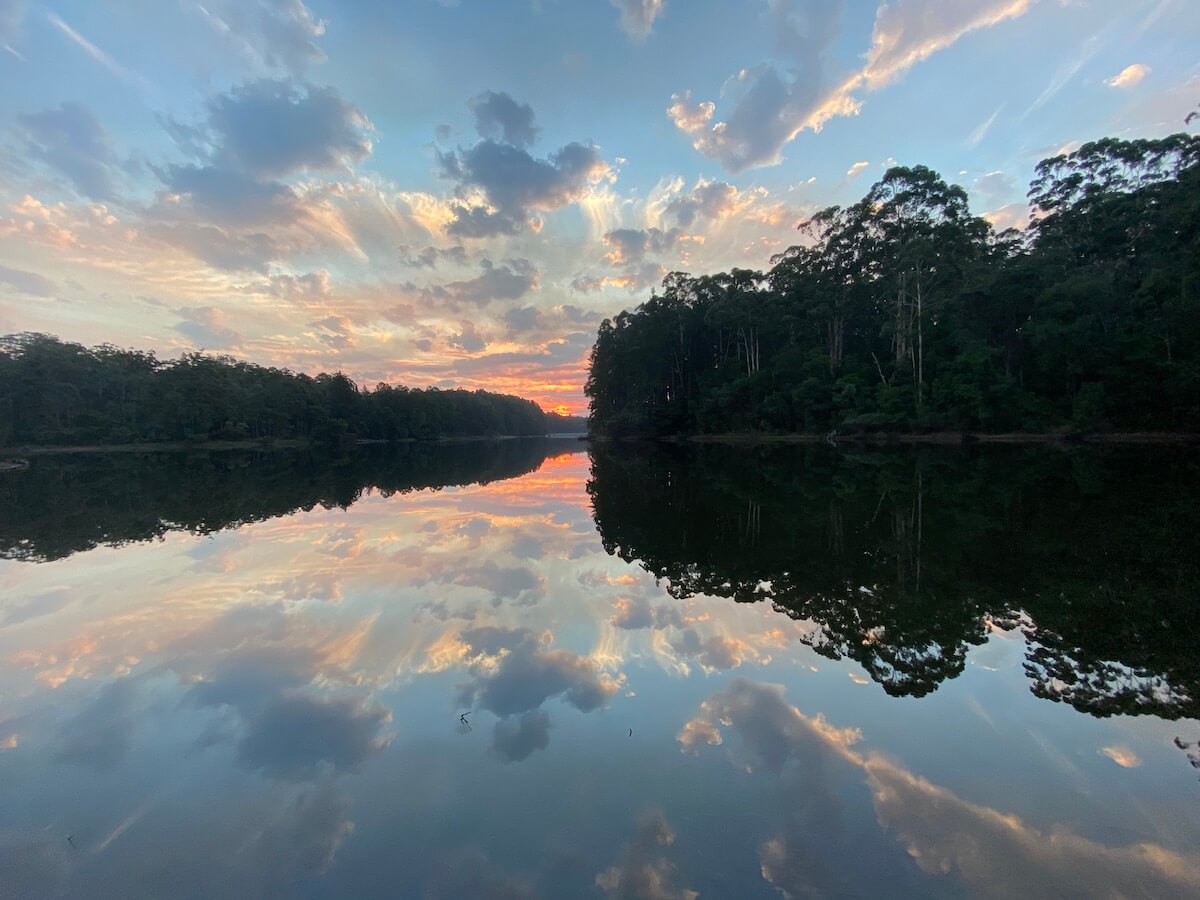 The Economic Folly of Mining in the Southwest

The Case of Allup Silica’s Proposed Open Pit Mine in Quinninup in the Southern Forest Region.

"Nothings as precious as a hole in the ground" is the famous line from that Midnight Oil tune, questioning the economic primacy of mining.

With tenement after tenement starting to appear across the rich forested and agricultural lands of the Southwest we really need to be asking the question as to whether the case for mining in the region really stacks up. Perhaps other things are more precious than a hole in the ground.

Allup Silica’s plan for its Antwalker project, a large open pit mine next to the town of Quinninup in a state-forest water catchment area is a case in point. If the project goes ahead, it will likely have a deleterious impact on the community and the environment, whatever mitigation and control measures are taken by the miner.

The community of Quinninup has been actively using various forms of media to oppose the mine. But in doing so we have often come across the ‘bring it on we need the jobs’ line or ‘this is the price of development’ line or our favourite yet: ‘This behavior(sic) is typical of woke lefty greeny movement who wants the world to stay stone age but on the other hand wants solar power on their off the grid homes and telsa's (sic) to drive without digging any holes.’ Clearly by this view if there is some land somewhere with some minerals underneath it, then the best course of action is to dig it up, no matter what the consequences.

To be completely fair, this view supporting the primacy of mining over other activities is quite understandable. The mining sector plays an important role in our economy. This is reflected in key metrics such as contribution to GDP, export revenues etc. But a couple of qualifications are required, particularly in the case of WA. Most critically if you take iron ore out of the equation, our numbers are nowhere near as flattering. Recent data shows that iron ore accounts for 63% of all WA exports, 35% of the WA state economy (GSP) and 28% of total state government general revenue. Without iron ore, we as a state go from being a strong performer to an underperformer. Importantly, sans the iron ore exports, other sectors see a significant rise in their relative importance.

Other key points on the value of mining, as outlined in some recent research papers from The Australia Institute[1] shows that:

The key takeaway is that mining is of course important, but it’s not the only game we can play. And being too focussed on mining can be unproductive. There are other ways of generating economic value.

Against this broader background on the value of mining, lets think about the specific above-mentioned Antwalker open pit silica sands mine.

When assessing projects, economists like to use economic contribution analysis which captures impact through output, income and employment changes. This is done by looking at both direct and follow on (or indirect) impacts where the latter is measured through multiplier effects. In this way, the economic impact of the project extends beyond the initial (direct) round of output, income and employment effects to consider suppliers and contractors for the project and their expenditure with other local firms and suppliers, and so on. It also considers the expenditure of households who receive income from these firms, which also results in additional demand, production, and local jobs, and the process continues.

Much like a ripple effect from a pebble dropped in a pond, the waves of private expenditure start big but get progressively smaller (due to leakages associated with savings and taxes). Nevertheless, it is these follow on, or indirect impacts which tend to have the greater impact on the local economy. A 1999 study on the economic contribution of Fremantle Port found that the impact was about 40% direct and 60% follow on, demonstrating that the multiplier factor can be significant. The key to ensuring such impact is to generate local jobs.

Luckily some analysis is available that shows which industries generate the most (or least) jobs. The table below shows how many jobs are generated from $1 million in economic activity across the main sectors in WA – measured both directly and including second round downstream impacts (per similar multiplier effects described above). These are respectively represented by the direct and simple employment multipliers in the second and third columns of the table. As can be seen, mining relatively speaking, does not generate a lot of employment, measured both directly and indirectly. 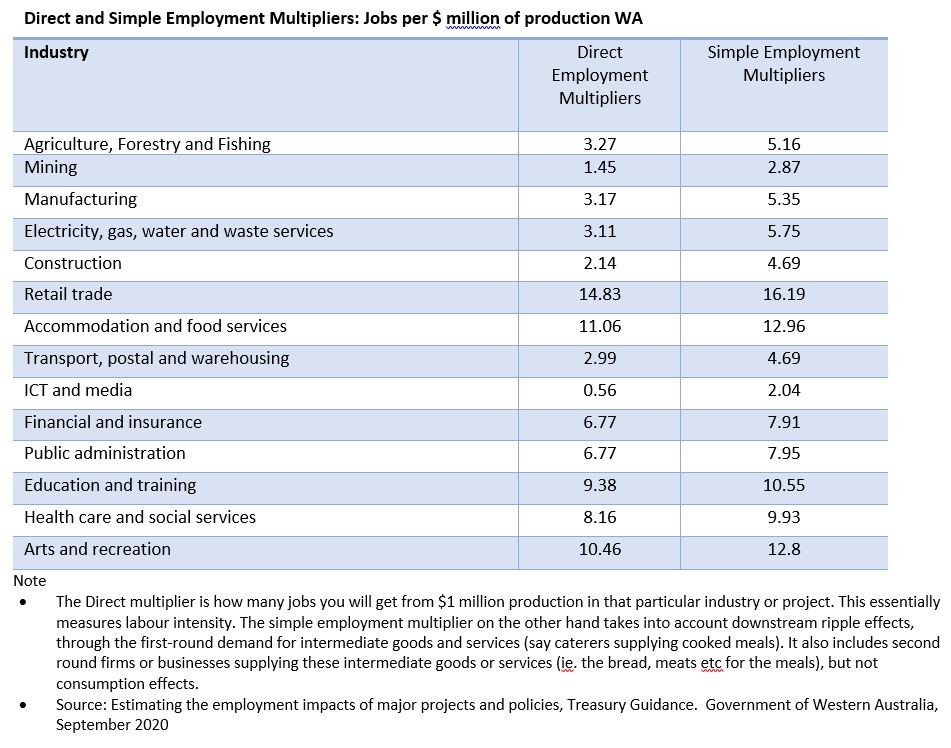 Two key points from the above analysis show that:

1) when assessing the economic contribution of a project it is the follow-on or indirect impacts that generate much of the economic impact through multiplier effects; and

2) mining is much less able to multiply that economic impact throughout the economy compared with other sectors.

This leads us to the really important point as to who will benefit (or not benefit) from the Antwalker mine.

The direct benefits will include net profits paid to owners, tax revenues and other payments to government and the incomes of directly employed project staff. The owners of the mine - whoever that will ultimately be - won’t be based in the area so those benefits will go elsewhere, likely Perth, or possibly offshore. Some interesting analysis done by the Chamber of Mines shows that of the $61 billion direct economic contribution of mining to the state of WA in 2021, over 62% ($38 billion) was spent or accrued in Perth. This compares with just 2% for the Southwest, 2% Goldfields-Esperance, 0.15% Great Southern and surprisingly just 3.5% for the Pilbara.

Clearly the economic benefit of mining is not something that accrues locally.

This will also be the case with the Antwalker mine as it will not generate much local employment. There will probably be a few managers, technicians, heavy equipment and process operators on site. But as noted repeatedly by the proponent, it is a very simple mining operation which involves basically digging up the sand and putting it on trucks. Most employment generated will be in the haulage of 20-40 million tonnes of silica sands to the port of Bunbury where the drivers and their families will most likely be based. Most skilled operators are also likely to be sourced from outside the region. This means that the indirect or follow-on impacts of household expenditure will likely happen elsewhere, not locally. The economic benefits for Quinninup and neighbouring areas will be minimal

Let’s consider the costs. This is a much more complex story to capture. We won’t attempt to put a value on the unique natural environment that will be destroyed by the mine, as this is a near impossible task, well beyond the scope of this short paper. However, the loss of incomes, outputs and asset values associated with this environmental damage is more tangible and quantifiable.

A key example is the destruction of Quinninup’s future tourism potential. Given its setting on a beautiful lake in a tall-timbered forest and close to a range of attractions, Quinninup clearly has enormous tourism potential. For the most part this not well known and this is both a blessing and a curse. It’s a blessing in that even on the busiest public holidays you can be canoeing on or walking around one of the most beautiful lakes in the southwest and have it all to yourself. It’s a curse in that because of our obscurity, we can get proposals to put an open pit mine a few hundred metres from our township. It would be unimaginable to see similar proposals being proposed for locations directly adjacent to Yalingup or Eagle Bay. The key point is that Quinninup could become an important tourism destination in the Southwest, generating significant incomes and employment (with high multiplier values), but that potential would be seriously curtailed if the mine went ahead. Who wants to holiday at a lakeside location, whilst having to deal with never ending noise, dust and visual pollution associated with a nearby open pit sand mine?

The loss of tourism business would flow through to less demand for accommodation, food, retail, tours and a range of supporting services from firewood provision to cleaning, auto services to haircuts, amongst many others. Given the high employment multipliers in these sectors, both direct and indirect, these losses would be multiplied throughout the regional economy. In addition, housing prices would be depressed, and new construction and developments constrained, again with similar follow-on multiplier effects.

Given the regions complex and sensitive hydrological systems, a silica sand mine in the water catchment area in the Dordagup State Forest and elsewhere could negatively impact on water access issues for local agricultural producers, again with damaging indirect impacts multiplied throughout the local economy. Mining in the area will also undermine the growing brand and reputation of quality southern forest food produce.

Finally, the high volume of haulage required to get the silica sands to port would put great strain on local roads and highways. In particular, the frequency of truck movements would undermine the amenity and safety of the main streets of key towns such as Bridgetown, reducing retail trade and putting downward pressure on commercial property prices and rents.

Of course this is only a very broad brushed high level view of the all the benefits and costs. That said, it’s not hard to see that due to the lack of local employment opportunities offered by the silica sands mine, coupled with the high employment and consumption multipliers of the economic activities that the mine would displace, that there really is little local or regional economic benefit. It might be great for the select few mine owners and main contractors located elsewhere, but the mine would only generate net-costs for the southern forest economy and regional communities. Silica sands has exciting market prospects, but there are plenty of other locations where it can be mined in WA[3]. We need to keep these mines out of the southwest, in particular the irreplaceable southern forests.

[2] Mining employment rations are higher in WA, but as can be seen from the above WA Treasury analysis, mining generates less jobs, both directly and indirectly, compared with every other sector except for IT/media

Next
go back to blog

Our Town Is Under Threat Please Help Us Save Quinninup

Please help us preserve our forest community against this destructive mine.

JEWEL OF THE SOUTH-WEST 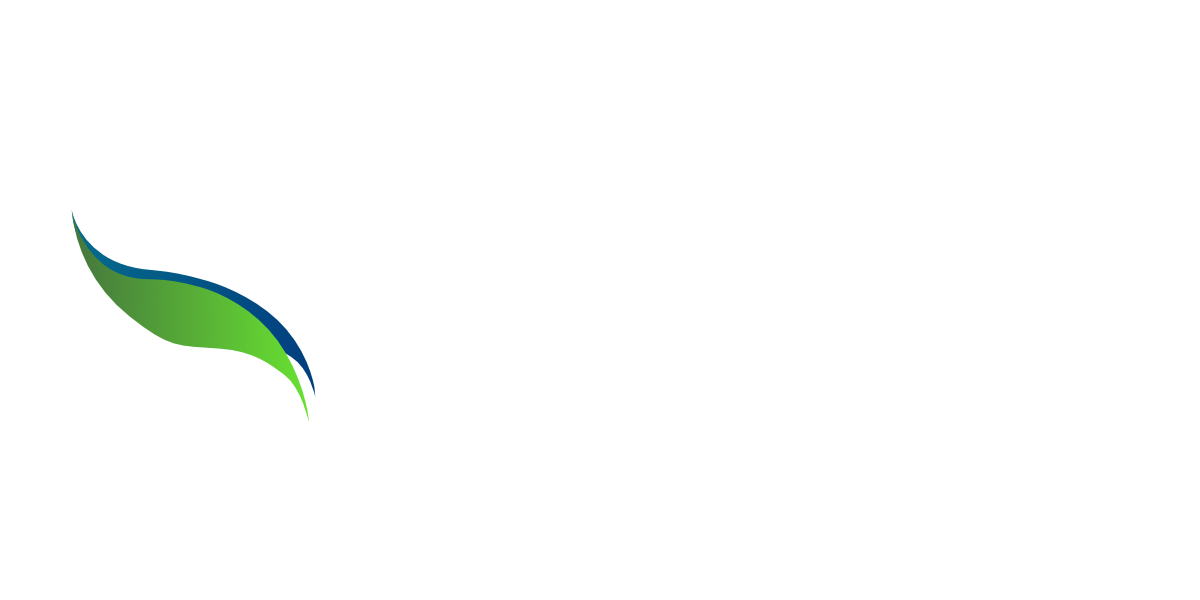 The Quinninup Community Association acknowledges the Aboriginal and Torres Strait Islander People as the original custodians of this country, recognizing their connection to land, waters and community. We respect their cultures and Elders, past and present.

We acknowledge Pibelman Noongar people as the original custodians of the land on which we live.